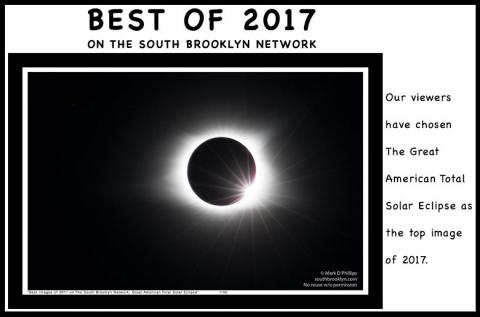 The "Great American Total Solar Eclipse" was voted the top image of 2017 by you, our viewers. Taken on August 21, 2017, in Murphy, North Carolina, the Total Solar Eclipse was the first on the East coast of the United States since March 7, 1970. It was a truly remarkable experience and one that we cannot wait to see again.

Make your plans now for the Total Solar Eclipse of April 8, 2024, which will pass diagonally across the USA from Texas through Maine. Dallas, Texas, will have 3 minutes, 53 seconds of Totality! You can also just drive to upstate New York to Lake Placid to experience 3 minutes, 23 seconds of Totality. The only problem is that the date was cloudy 77% of the time since 2000. 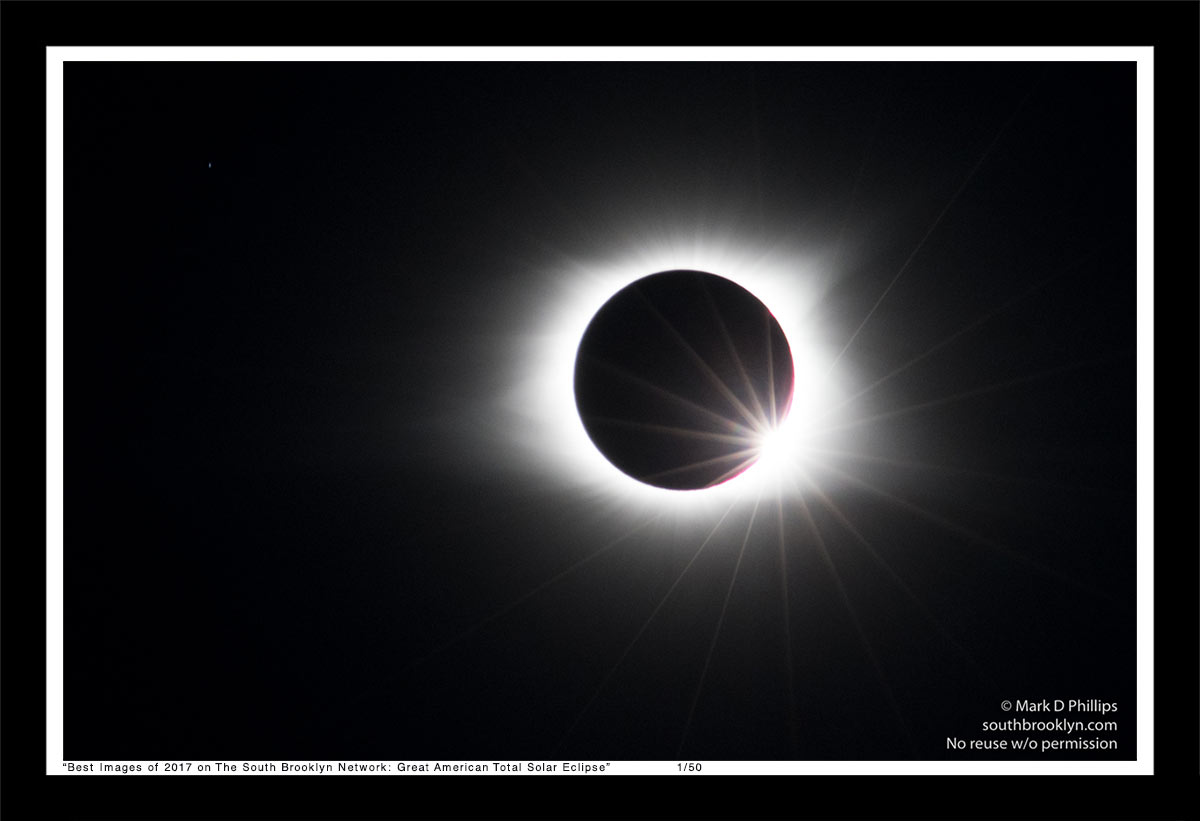 Check out our favorite map site of the eclipse on timeanddate.com to pick your spot for the April 8, 2024, Total Solar Eclipse.

The wife wants to go to water for this one rather than the mountains. How about Mazatlan, Sinaloa, Mexico? The eclipse first touches land at this location at 10:51:25 am with totality occuring at 12:07:26 pm and lasting an incredible 4 minutes, 18 seconds. To top it off, the date was only cloudy 28% of the time since 2000. Sounds like it could be a perfect Mexico vacation.

Let's continue with your choices of the top images.

Coming in second place in the viewer voting of the images of 2017 was my favorite image of Mikaela Shiffrin from the World Cup at Killington Ski Area. Shiffrin has ruled slalom not only at Killington but throughout the World Cup competitions. Her grandmother has attended both years at Killington and been a source of both inspiration and emotion for Mikaela. This image really captured that feeling with her Nana. There are not many athletes who truly show emotion and that I feel are just genuinely good people. Mikaela Shiffrin tops my list of athletes that I feel every child can look up to. I hope she stays as sweet as she appears. 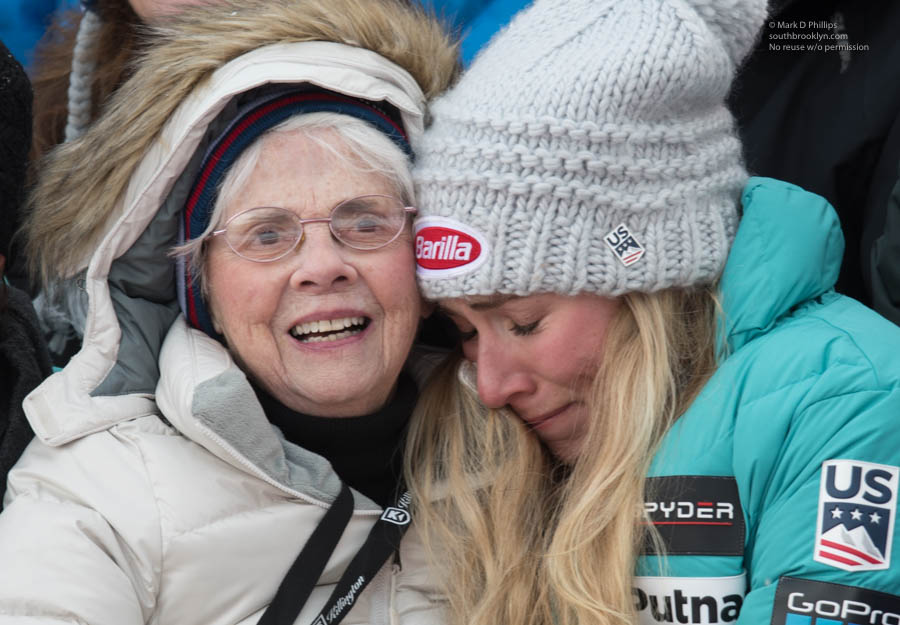 Mikaela Shiffrin cries as she hugs her Nana after winning the slalom at the AUDI FIS Ski World Cup Slalom at Killington. Pauline Condron, the 95-year-old grandmother of the Olympic champion Mikaela Shiffrin, watched the race for the second time at KIllington.

Coming in third place in the viewer voting of the images of 2017 was my favorite fireworks photograph, Blue Fire over a Ghostly City, from this year's Macy's Fourth of July show in New York City. I have been incredibly honored to be invited to a Fourth of July party thrown by a  remarkable couple opening their home for the most amazing views of this yearly New York institution. It really is a photographers dream to have access to a location that provides such remarkable vistas. 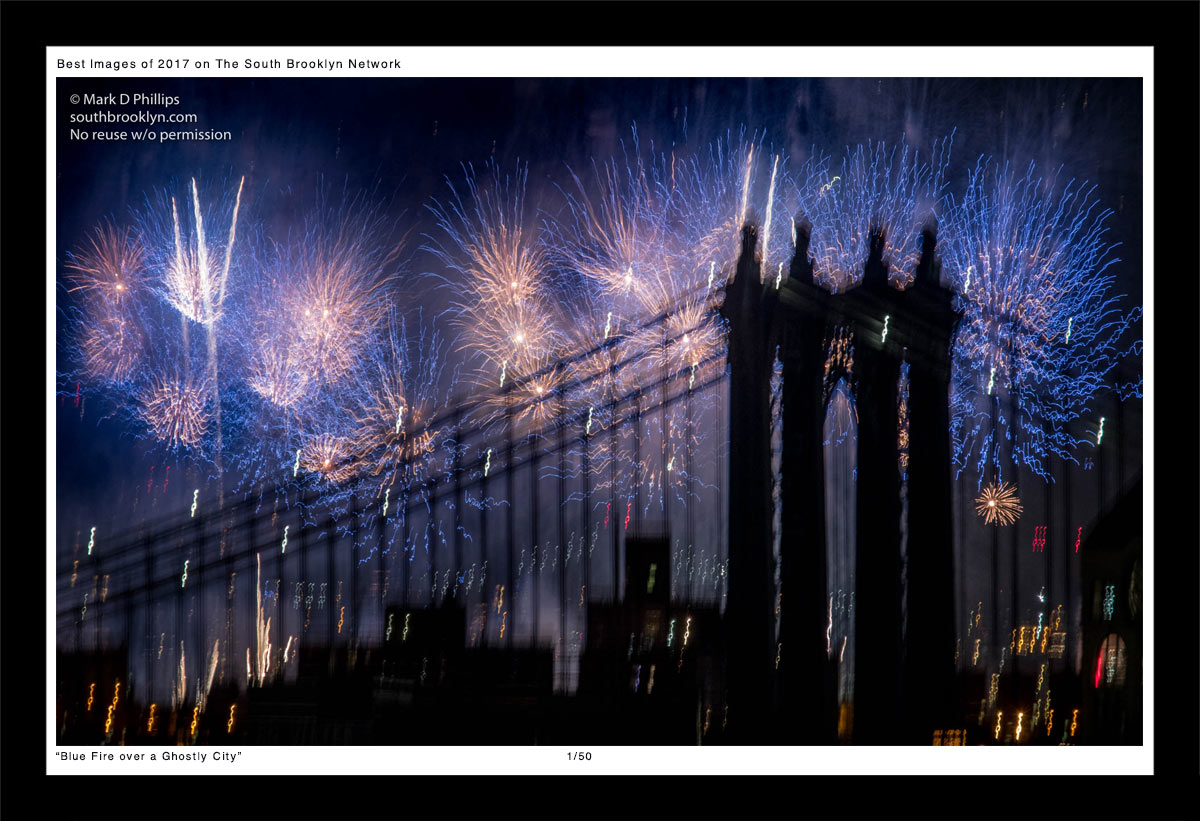 Blue Fire over a Ghostly City: The 2017 Macy's Fireworks over the Manhattan Bridge in New York City available as a 13" x 19" signed print in our store.

We are proud to announce the opening of the markdphillips.com Fine Art Image Store featuring his work from the South Brooklyn Network. For the opening, we are running specials for framed, numbered and signed images.

The Top Images of 2017 on SouthBrooklyn.com

Half Price Special for the launch of our new store:“Blue Fire over a Ghostly City” 13x19 framed, signed, numbered ©Mark D Phillips

Here's your chance to win a signed and framed original artwork from SBN! The Best Images of 2017 on The South Brooklyn Network includes a couple of series of photographs as well as several stand-alone moments that we especially liked.

The Gowanus Canal is always one of our favorite subjects as anyone who regularly comes to our site knows. The Great American Eclipse was an event of a lifetime taking me back to my roots in North Carolina and our sister site, kidseclipse.com, taught children (and adults) the astronomical events that bring a total solar eclipse to our skies.

Baseball and sports are always high points of the year in our household and in our coverage on southbrooklyn.com and when Noah Syndergard became a Brooklyn Cyclone for a day, we could not miss Thor in Coney Island.

Photography continues to grow in Brooklyn both on southbrooklyn.com and the wealth of galleries throughout the borough. Photoville has become one of the premier worldwide events with its unique galleries of shipping containers under the Brooklyn Bridge.

So choose First, Second and Third in our Best of Gallery and enter your email address for your chance to hang your top choice on your own wall. YOU MAY ENTER UP TO FOUR TIMES! Results will be posted on February 1, 2018.

All the photographs are ©Mark D Phillips and are available on markdphillips.com